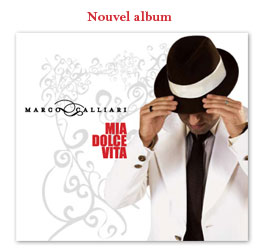 A few weeks ago, Marco Calliari's second solo album celebrating his Italian heritage came out. The first, which played non-stop at my house the whole summer it came out, was entitled Che la vita. It contained only originals, all of them absolutely deliziosa.

So, he's back with Mia dolce Vita. The album contains only Italian classics. (When I say "classics" I don't mean folklore mind you). Most of the songs on there he used to play live during Che la vita concerts, if you had the chance to catch one of them. (Between L'académie du massacre (Mononc Serge & Anonymus), Anonymus, and his solo career, I've seen his shows so often when I lived in Sherbrooke that I worried he would think I was obssessed. When he started recognizing me, I decided to take a break, hehehe!)

So I bought the CD one morning while having breakfast at Pacini's (they're sponsoring Marco, they deserve the plug), and had a great time discovering or rediscovering amazing songs we get to listen to much too rarely. By the way, Marco Calliari is still backed up by the same musicians than on the first album, among which the fantastic Lysandre Champagne on trumpet (ex-Colectivo) and the excellent Carlos Araya (Anonymus) on drums. The arrangements are quite simple, and that suits Marco's style better than heavy ones would have.

Even though I think I'll personnaly keep on listening to Che la vita a little more, Mia dolce vita is surely one of this year's must buys. Buy both of them why don't you!

My favourite? L'Americano
Best cover? Caruso (much better than by the 3 tenors yelling at the top of their lungs)
Coolest one to have in your disco for parties? Bella ciao 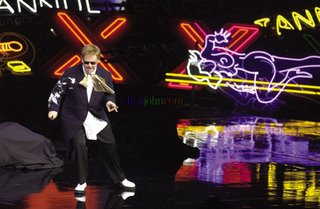 Let's set the scene. It is Saturday November 11, 2006. I'm in my living room, lying in my futon, in a crappy mood, trying hard to kill the cold that moved into my nostrils 2 weeks ago. There really is nothing exciting going on. All of a sudden, the phone rings. « Argh, what's this », says I. It's my dad, calling to offer me a free pair of tickets to go see Elton John at the Bell Center.

Way to make a bad mood disappear! Totally exhilarated, I call up my « partner in crime », Gabrièle. One cancelled dinner later, Philippe (who loves Elton and already had his ticket) and I go to pick her up. We get our tickets, we run, we find our seats... (in the greys, but in front of the stage).

First, the sound. That night, at the Bell Center, I have heard the best sound of all the show's I've ever seen. Really. Sir Elton gave a 2h30 show, no opening act and no intermission. He's an entertaining machine. Nothing less. He didn't even break a sweat!

Elton John is on tour promoting his new (and very strong) album The Captain and the Kid (follow-up to 1975's Captain Fantastic and the Brown Dirt Cowboy). Be that as it may, Elton John is an artist who wishes to please his public first and foremost... and he did. He played 3 of his new songs, and for the rest of the night he swayed us with his unforgettables... and he has many.

Of course the music was marvellous ( no doubt his drummer from the seventies, Nigel Olsson, and his extraordinary guitarist Davey Johnstone were partly responsible for this). Elton John is a great pianist who has a real talent for revisiting his own hits. I laughed. I cried. I actually cried quite a bit (especially during my favourite Elton song, Goodbye Yellow Brick Road, that he just decided to add to the show). It was beautiful and unique. I'll probably never have the chance to see Sir Elton on stage again, especially in Montreal (his last visit was ten years ago after all.)

The thing I'll remember most though, is his generosity. He didn't talk much during the show, except to explain his new songs... without it feeling cold towards us. He bowed between each song. When we asked for an encore, he came back right away. No half-hour long teasing. He signed autographs for the people in front of the stage. Then, he sang the only two songs that were missing: « Candle in the wind » (Norma Jean version), and « Your Song ». Tears were flowing once more!

Elton John is a true star, ans has earned my eternal respect. With his music, but also (and maybe even mainly) with his magnanimity.

PS Thanks cousin Louise for this wonderful opportunity.
Posted by Mui at 10:13 AM No comments: