Speak, damit, everyone is listening 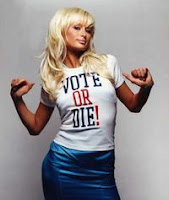 I am not writing this to tell you how to vote. I won't even tell you for whom I'm going to vote. (Though I do believe building our own country would be the best thing that could happen to Quebecers, english OR french). I just want to join my voice to that of many others to ask you to vote today. They're all the same and it's all bullshit anyway? Cancel your vote : if enough people do it, the elections will be canceled. Speak out, focrissake, it's the only time for the next 4 years you'll be asked what you think. If you don't want to vote for one of the members of the 33 1/3 club, you won't win your elections... but each vote means more money for that party the next time around.

I'll get sentimental on you now. Be warned, next comes emotionnal blackmail. Please vote, in the name of those who don't have the right to. In memory of those who died so that you and I have that right.