I just bought Espace Libidinal, a 2006 album by the French-speaking Québécois band called Les amis au Pakistan. Yes, it's French, no, you don't need to speak French to enjoy this band. If I'm talking about this now, it's because they made a blip on the muscial radar recently during a well recieved show at Montreal's Francofolies.

General comment about the album : it drives you so nuts it's fun. It puts you in a transe, a little like when you watch a Pipilotti Rhyst video. You wouldn't believe it first hand, but it's even better as background music than when you listen to it attentively. A good first album for this eletro band with a spritz of Pop that call themselves "retrofuturistic". That being said, the songs made by the band (a musician, an author and 4 women singers) are not all equally good. Good thing is, at least half on them are truly remarkable.

Cendrillon lave le poêle, the hit, in my opinion.

See more Kristin Chenoweth videos at Funny or Die
Posted by Mui at 10:46 AM No comments:

Hairdresser : a diamond in the rough!

Lucille Cataldo... what a revelation, and my discovery of the week! (Thanks Véro)

Special dedication to Vicky and Julie-Geneviève!

New song by The Cure

I've just seen the video for the new single by The Cure, The Perfect Boy. I like U2. But not when it's The Cure sounding like U2. Iiiiish. I don't want to sound too harsh, but this song was boring to me. No rythm, no quirky Curish bridge. And I don't know how that's possible, but it seems to me like Smith sounds a little flat at the beginning of the song. I hate it when one of my all time faves dissapoints. That being said I do like the lyrics.

The video itself is quite ordinary. B&W, no story, everybody close up. Oh and the lip licking at the 20 second mark... thanks, but no thanks.

PS : For those who know them (heads up Passeport people), we now what Dan and Éric will look like in 30 years! Hahaha!

Lenon's killer will not be set free

The court decided on Tuesday that Mark David Chapman, who shot and killed John Lennon, will not be set free on parole.

We're not going to shed a tear over this.

Lily Allen has been working hard at her new album in the past year. The pressure is on since her first made the UK charts tremble and the US ones well... shake.

Anyhoo, the song in the pink thingamajig down there was thrown on the Interweebs to create some buzz, so I'm happy to relay!

The song is funny, a little bit less candy sounding than her other songs, and I like that. I did like the really bouncy music with the really cynical lyrics though.

So it's definitely worth a listen, and the title ain't bad either!

Fuck you very much!

They aren't coming to Toronto, Ottawa or Montral. Bleh.
Posted by Mui at 5:59 AM No comments:

A blog by Madonna's brother? 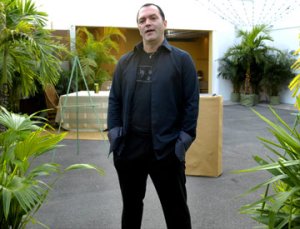 All of this has to be fake. I'm positive it is... unlike most of the people who comment on this blog. Madonna's brother, Christopher Ciccone, wrote (!) the recently pyblished biography Life with My Sister Madonna. According to the blog My Sister Madonna, he wants to divuldge the information he couldn't put in the book "because of the lawyers" (who's lawyers?).

So there you go, the title says it all. What I think of the song? Well it's Slipknot, no doubt about it. And I love Slipknot. That being said... I hate the chorus. Those back vocals are really wussy remind me of a band I don't want to mention.

That being said, it's (one of the?) the first single, it's also probably one of the most commercial songs on the album. I miss Crazy-Corey. Do you remember their first album? There were times where he sounded totally whacked. Insane. And it was just excellent.

Since then, he's only sounded pissed off (or wussy in this case). I'm telling you, I really miss Crazy-Corey. And those back vocals will in no way replace him.

In the video down there, you'll hear the new song and see the new masks. The album is set to come out on August 26th.

PS : Thanks Phil for the news.

PPS : Thumbs up to R1ckMusic for one kick ass video job. I had no research to do, everything was right there. Btw, the lyrics are in the video's description.

From Gainsbourg to Ren & Stimpy or Why I am a nerd

My roomie, Sam, often asks me how come I remember all sorts of useless factoids and always manage to blurt them out at the right moment during parties or dinners. Well in fact, all sorts of little links get created in my very weird brain and that's how I remember all that stuff. Problem is, I end up loosing the links and not the info, so I never remember HOW COME and FROM WHOM I got this stuff.

Today I did an amusing little experiment. I browsed around Youtube and left the browser windows open. This means that the little links, this time, were hyperlinks, and those are shareable! Yippee! Not link loss here ;)

So, if you feel like it, hop on to my train of thought.

I love a song by Serge Gainsbourg sung by France Gall : Laisse tomber les filles. I listen to it on Youtube.

A comment under the video reminds me that I heard an English version of that song once... but where? Come on little link, come back...

So I listen to the English version, in the referrals. It's by April March, and it's called Chick Habit.

Thanks to the comments once again: EUREKA! It's the sont (it its bilingual version) that goes with the end credits in Death Proof! Ah Quentin...

Oh and the lyrics hit much harder in English than in the French version Gall recorded when she was 16.

oh, how your bubble's gonna burst
when you meet another nurse
she'll be driving in a hearse

The French version only says that next time, you'll be dumped, you'll be left crying and so on. Nothing so violent as being cut in two!

So then I wonder: "What else has April March done?" Wiki will tell me! Well, apart from being a singer, she's also a cartoon animator. She workes on Pee Wee's Playhouse and... Ren & Stimpy.

So there you go, a few factoids for your next dinner party!
Posted by Mui at 7:25 AM No comments:

Let's talk mascara (boys, you may skip this post) 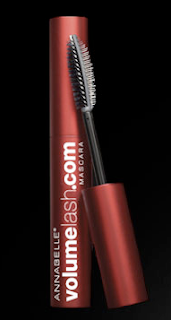 Like most of you know by now, I work in advertising. One of our clients, Annabelle cosmetics, asked us to advertise their new mascara called volumelash.com (yes, the .com is a part of the mascara's name. No, I didn't come up with that :p)

I fit into the public they want to reach from now on (I'm stylish, edgy, a trendsetter... and you better not say that's not true! :D). I also worked on the microsite, so I hope you'll go take a look a it.

So! Cool packaging, good product... but don't think you jut have to go "swish swish" and it's done. Real makeup afficionados know that the brush and the way to put it on make all the difference in the wonderful world of mascara.

The brush rocks. A comb to separate lashes and a brush to apply a nice coat of product.

Personnaly, I like a more dramatic effect so I only use the comb side to get a really long-lashed, black, almost fake eyelash effect.

For something more natural, use the brush side too.

In the site, we put instructions to apply the mascara, but also some tricks and tips from Julie Bégin, an internationaly renowned makeup artist . That's always fun and useful!

UPDATE : If you blog and you want to try it and say what you think of it on your blog (it will also get posted on the site), just drop me a line and I'll get you a volumelash.com mascara to try out! Sorry, I won't be sending any more mascaras : my blog ended up on a freebee site and I'm getting too many emails. Sorry, the whole point of this ad campaing is to get the mascara out to bloggers and people who will actually talk about it, and I can't start choosing between the people who SEEM legit and the people who SEEM to be after some free make-up.
Posted by Mui at 8:15 AM 3 comments: