Yesterday I heard they were coming out with Amy Winehouse greeting cards...

I do hope they make one that says "Get well soon"

According to infamous celebrity gossip site TMZ, Michael Jackson has died of a heart attack this afternoon. This story is developing, so, more to come.
Posted by Mui at 2:54 PM No comments:

Internationally acclaimed Montreal DJ Champion is back! And it's good too. It sounds like the stuff we love him for, no doubt about that. It's got that Champion hook, and it's going to be awesome live. What's coming up and when? Who knows, for now all I found floating around is this:

You may also downolad Alive Again.
Posted by Mui at 9:34 AM No comments:

Ed McMahon has passed away. I'll share a childhood memory with you guys in his honor: I loved Star Search as a kid, so here's the opening sequence of the 1986 finals. Mr McMahon, you shall be missed.

If, like me, you are or were a fan of Bloodhound Gang, you'll like this. And you'll laugh. Jon Lajoie is always funny, this song isn't an exception.

U2 + Spiderman = heresy and other arachnid news

Really, I'm giving more and more insight into my troubled mind in this blog: I'm a total Spiderman nut. A bit OCD actually. In this quite funny video, you'll find out about the spider's past and future, on Brodway for example. Guffaw!

A U2 Musical: The Latest Attempt to Make Spider-Man Suck -- powered by Cracked.com
Posted by Mui at 8:40 AM No comments:

Marilyn Manson and Lady Gaga reworked Love Game by the Lady. Even if it reeks of commercial opportunism, I applaud the initiative. What a match, as they say. The song is meh at times, but there are some great bits. What I hope for is another collaboration between the two, and maybe something more... original. The sound quality sucks, but that's because it's a recording of a recording. I'll post a better version when I find one.


PS Is it just me or do they look a little alike too?
Posted by Mui at 7:53 AM No comments:

Yesterday, my roomie Claude and I had a friend of hers over for dinner. Two bottles of wine and a few scotches later, we decided to play a little Texas Holdem. Result? I didn't loose my shirt but I'm in no way capable of writing a better post than this this morning!

So here's Kenny Rogers and his gambler during what seems to be the last leg of a recent geriatric tour. Oh, and in other news, too much surgery will eff you up.

Ok, I think the teenager in me just had a seizure! I've just found out that my favourite band when I was in high school, Rancid, had an album come out this week!

I'm gonna go buy it this week-end and tell you guys all about it. In the meantime, here's a review from the reliable peeps at Punktastic. The album is called Let the Dominoes Fall.


RAAAAAANCIIIIIIIIID!
Posted by Mui at 8:42 AM No comments:

Electro pop diva Peaches will be in the next issue of Wound magazine. 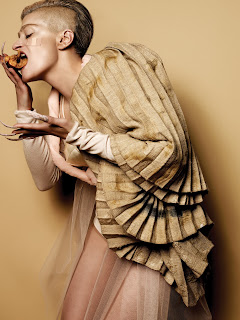 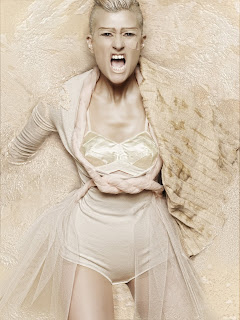 Found on Style Canteen.
Posted by Mui at 11:10 AM No comments:

About Barton Fink at Club Lambi

Friday I went to see Barton Fink at Club Lambi.

(Big thanks to Frédéric Laurendeau who let me use his photos)

When I wrote my pre show post, I had only heard recordings. What a revelation seeing them live was! As you know, I have a little (ok big) preference for Rock. Oh joy and happiness, they majorly rock out on stage.

During the show, the electro accents of the record were a bit more subdued, and their Punk Rock side much more obvious. Of course, let's not forget their funky side, also very present, thanks to which we dansed, jumped, tapped our feet...

So the quality of the songs and of the recording makes Gear a good album and a good buy... but go see them live. The chemistry between the band members and with the public is so good it makes you wish you were on stage with them. Proof? I usually am much too cynical to clap during a song, and in this case my hands were red from my efforts to participate!

A few snippets I picked up during the show:

The girl who loves cherries: « Gimme some more is such a sexy song... »

Flo: « Ça déchiiiiiiiiire! » (Translation: this rips, as in awesome... I had to leave the French version, this guy being from France.)

Let me end with a shout out to the opening act, Kamikaze, with its great percussion and its Thom Yorkeish vocals ... too bad I can't seem to find a link. Help anyone?

Kamikaze and the Club Lambi staff are great people to drink waaaaaaay too many shooters with (right helo?), but that's another story...
Posted by Mui at 10:07 AM No comments:

Remember I told you, in the American Idol frenzy, about Dilana Robichaux who had been on Rock Star Supernova.

In this vid, Dilana sings Led Zeppelin classic Whole Lotta Love at the Hollywood Improv. It was on on May 30, 2009, and she played with Phil Varone, former drummer of Skid Row, and the house band.

It's not as high energy as I would have liked it to be, but the voice is sooooo there. Quite a performance!

So, do you miss my link lists?

Maybe a few of you have noticed I haven't been making daily news posts recently. Well, Twitter's to blame for that!

Ever since I've started using Twitter, I've been sending everything 'short and sweet' through there so... yeap, that's it, look at the box on the right to see what I've been Twittering about, and feel free to follow me if you use Twitter too.
Posted by Mui at 3:03 PM No comments:

The Sunday Sinners on Spin

Spin magazine (maybe I'll work for them someday, I can dream can't I?) recenlty did a piece about a Montréal band I love: The Sunday Sinners. (ok actually I'm a total groupie because the drummer is a friend of mine).

So here's the mini documentary for your viewing pleasure, filmed at L'Esco in Montréal last month! Sonia, Blue and I were there and you weren't, naninanibooboo... hehe.

Like the full report says, drums will be your favourite instrument once you watch this!
Posted by Mui at 9:05 AM No comments:

A descriptive, or literal, version of a video doesn't seem that funny when you think of it. Well, that depends on the video.

Thanks Vio for the find! 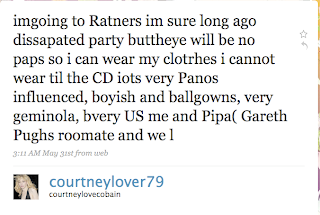 For the sheer entertainment value, of course...

What the heck is she talking about?
Posted by Mui at 8:06 AM No comments: