During a show given in Vancouver during the Olympics, Luc Brien, lead singer and guitarist of Montreal band The Breastfeeders, was hit by a bottle thrown from the pit.

Wow. That was stupid and dangerous.

I love Twitter. There's drama going on there that I could never have access to before, or in any other way.

Of course, Courtney Love is highly entertaining on Twitter (yesterday she attacked Edward Norton - her ex -, and said she wanted to sleep with John Mayer and punch him... isn't that just magical?)

Anyway this time Miss Love isn't responsible for the first blow, instead, she gets called out by Lily Allen.

Rumor had it that the two delicate flowers had tried to rip each other's petals out during the NME awards. According to Allen, it's not so: Love accused her of putting a lock on her clothes and Lily told her to shut up and stop spreading rumors. Because, she says,"i would never fight with her , as a rule i don't pick on crazy old ladies ."

You just can't make this stuff up ;) 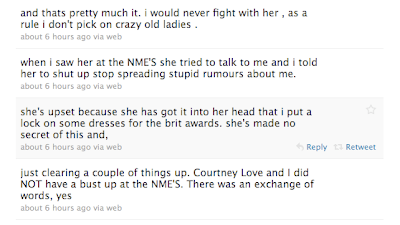 By the way, Lily Allen also tweeted that she's postponing her retirement to play with Jay Z at Wireless in London.
Posted by Mui at 7:44 AM No comments: